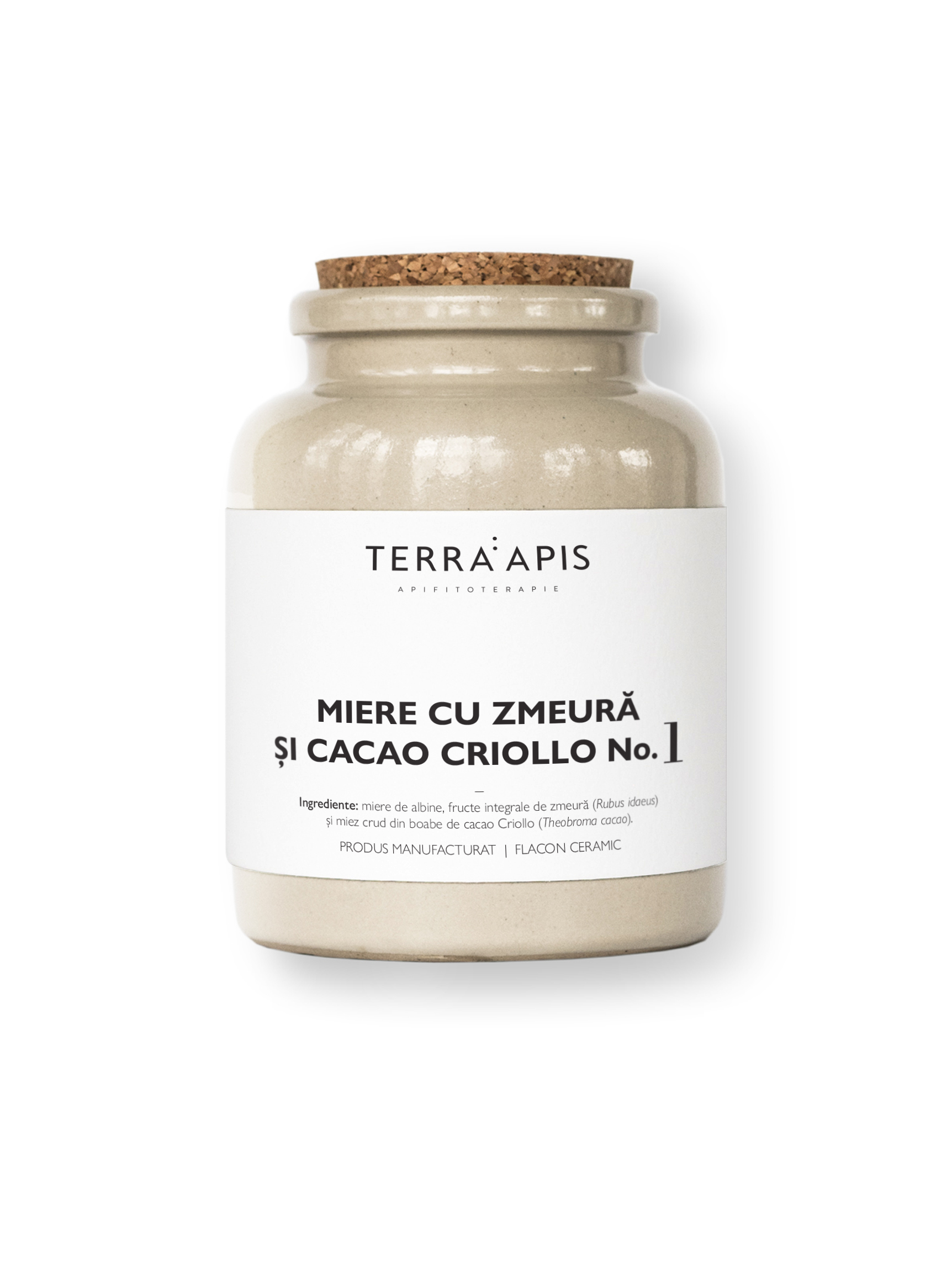 Honey with Raspberries and Criollo Cocoa No. 1

“WHEN HONEY MEET RASPBERRY, YOU SPEAK OF ETERNAL YOUTH”

The fruits of raspberry forest are a true collection of minerals manganese, magnesium, calcium, zinc, potassium, phosphorus, all the forms easily assimilated, plus vitamins A, B1, B2, D and P, especially vitamin C present in impressive quantities. Only in this list, and we realize that raspberry is a real source of health, each fruit is a variant of its highly successful natural supplements of vitamins and minerals found in pharmacies.

Cocoa beans contain over 300 compounds with an important role in health Metiner, including polyphenols, flavonoids, feniltilamină, teobormină, minerals (potassium, copper, iron, calcium, magnesium) and vitamins. Studies have shown that cocoa beans are one of the best sources of antioxidants, at a concentration of up to 10% – three times more than green tea and two times more than the red wine; known to be a source of antioxidants, antioxidants blueberries culture containing 32, 61 Wild blueberries antioxidants, while in cocoa antioxidants are 621. However, cocoa beans are considered natural antidepressant; they contain dopamine and serotonin, substances that induce a positive and healthy mental state.

There are three different types of cocoa used in chocolate production today: the noble Criollo, Forastero village and a hybrid between the two, Trinitario. Criollo and Trinitario cocoa beans are often called fine or flavor, while Forastero is considered “normal” or “bulk” and used in mass production (although there are exceptions to this rule). Over 90% of world cocoa production is represented by “bulk”, mostly from Forastero beans. The remaining cocoa, cocoa that fine / taste, obtained from most of the varieties Trinitario and, of course, of all varieties Criollo.

What is the Arabica coffee grain, finest and rare Criollo bean is chocolate. Criollo chocolate has a distinctive reddish color and a distinct taste as complex, which may include aromas of caramel, nuts, vanilla and tobacco. Criollo bars are quite rare and should be tested if they are encountered. That said, the taste might not be to everyone’s liking, because it differs considerably from the Trinitario and Forastero most common varieties that define generally the taste of dark chocolate that most of us know. These tastes are quite recent – in two hundred years ago Criollo cocoa bean was predominant. The pervasive today Criollo cocoa bean is generated by low tree resistance to disease Criollo, Forastero and is the reason why, more robust now dominate the global cocoa market. Today, most Criollo trees are closer than their ancestors Trinitario pure, very few authentic Criollo trees are alive.

Honey Raspberry and core organic raw cacao beans is recommended lovers of intense flavors, surprise ingredient in desserts or as a topping for pancakes, semolina with milk, rice milk or vanilla ice cream.

Be the first to review “Honey with Raspberries and Criollo Cocoa No. 1” Cancel reply